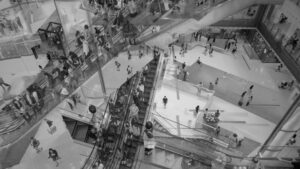 In collaboration with Open City Documentary Festival, LUX presents a new exhibition by Chinese artist, filmmaker and researcher Bo Wang. Now based in Amsterdam, Wang’s critical spatial practice incorporates film and video, new media, and installation. Hong Kong is a key site of interest, Wang explores how the city operates as a liminal space situated between the legacy of British colonialism and its contemporary connection with mainland China. Through his carefully observed studies in architectural design, and the organisation of urban space, he reveals latent systems of power. He uses a range of archival and contemporary found footage, setting visual systems against each other to pose questions surrounding the production and consumption of images. Through a series of recent essay films, made in collaboration with artist and researcher Pan Lu, his work examines colonial histories, trade and commerce, and systems of categorisation.

The Revolution Will Not Be Air-conditioned is a new work from Wang as he extends his practice into a careful study of the shopping mall, politicising this otherwise intentionally neutralised space. At this exhibition at LUX, Bo Wang’s work is situated within the context of Waterlow Park. Rare and exotic botanical species populate the gardens with views across to the City of London, the centre of the British colonial project.

The title of this work was borrowed from social media comments in the midst of the 2019 Hong Kong anti-extradition protest, which originally references Black civil rights activist Gil Scott-Heron’s iconic 1971 poem “The Revolution Will Not Be Televised”. The images of clashes between protestors and police in Hong Kong have constituted the most sensational memories of global turmoils in the last phase of pre-Covid age, which occurred, peculiarly, often against the backdrop of air-conditioned shopping malls.

Taking this phenomenon as its point of departure, the work traces the architectural evolution of these retail complexes. Drawing from a range of historical references—including the Crystal Palace, built for the 1851 Great Exhibition in London; 19th-century terrarium prototypes used in the British Empire’s botanical trade; and 20th-century corporate salesforce training videos—the work reflects on how the mall as a spatial form evolved from its colonial root of conquest, to a machine of consumerism and social control. Yet, The Revolution Will Not Be Air-Conditioned also pays close attention to how the intended outcomes of spatial design can be subverted, turning such insulated and sanitized spaces into a ground for political action and dissent. ­- Bo Wang

The Revolution Will Not Be Air-conditioned was commissioned by Junni Chen, for the exhibition Lustrous Like Plastic, Hessel Museum of Art, CCS Bard College, NY.

This exhibition is presented as part of the 12th edition of Open City Documentary Festival (7 – 13 September 2022).