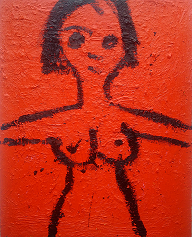 Philip Diggle: “I see a red door and I want it painted black.”

Memory Theatre   The ‘memory theatre’ was an aspect of a science of the imagination which was practiced from Classical times up to the Renaissance.  It was used for the development of memory, and also as a ‘mind-map’ – a connected symbolic space, often represented as a building, which spanned the imaginative or conceptual faculty.     (digital brilliance.com)  Oxford Dictionaries.

Philip Diggle is inspired by philosophical ideas, and these are used to tie together the paintings on the theme of Memory Theatre in his fifth exhibition at Highgate Gallery.  The ‘stage’ for Diggle’s ‘memory theatre’ is painting; it is both the forum and the activity.  In painting, memories are discovered and ordered in the doing and building of the works.

Diggle’s work is vigorously physical, with encrusted surfaces thick with oil paint.  In these pieces, the paint becomes the means by which memories are enclosed, caged, covered, discovered, accreted, obscured and created.  In his last Highgate Gallery show, large images of heads dominated.  Some of these heads exist beneath the new works, so that creation and destruction co-exist.  The process is a demonstration and investigation of the persistence yet elusiveness of memory.

A series of larger works refer to human experience within the built environment – ‘contained’ life, a ‘theatre’.  In some, the figure (highly abstracted) appears at the centre of the scenes. In these, another interest of Diggle’s emerges: rhetoric.  His own mark-making becomes a metaphor for the verbal play of words in public argument.

Philip’s ideas found practical focus in his art classes.  Pupils were encouraged to speak, present and respond to poetry and philosophy: a critical method which built self-awareness, confidence, and sense of context.  This initiative was rolled out school-wide.