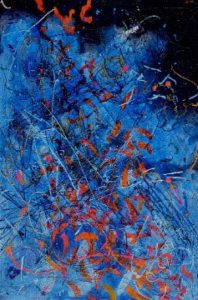 Image: ©Danny Israel, 2016. All Rights Reserved
Night Fishing in Ugljan (which continues until 22 June) is a series of 38 paintings which arose out of a trip to the island of Uglijan, in Croatia, where Danny Israel watched the fishermen use powerful lights to attract the fish to the surface.

These paintings follow the stream of life, from microscopic forms to larger sea mammals, as they emerge from the deep. It seemed there was a symbolism to this event, which it might be possible to approach in paint. As it turned out this experience proved to be an infinite source of wonder at the drama beneath the surface.

These acrylic images are achieved by liberal use of the same medium, water, but Danny also wanted to create surfaces which in themselves are visually engaging, which arrest the attention, which detain the eye and which invoke the imagination.

Danny Israel studied Fine Art at the University of Wales (Cardiff). His first exhibition was at Reading Museum in 1972 and he then exhibited annually at The Beecroft Gallery in Southend on Sea, Essex between 1972 and 1980. He has work in various collections including the Victoria and Albert Museum Print Department and that of Elton John, and has exhibited occasionally over the intervening years.

After a successful auction in 2014 he returned to exhibiting with a sell-out exhibition at the Babylon Gallery in Ely, and more recently at Highgate Contemporary Art. This exhibition at HLSI is his third in the current series, and is much the largest.