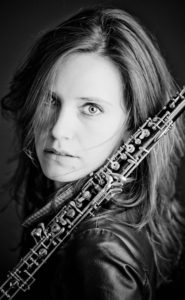 Talented oboist Liesbeth Allart performs live at Lauderdale House in a celebration of solo repertoire for the oboe.

In this concert, Liesbeth explores the Oboe’s deeper and more sonorous relations with the Oboe d’Amore and the Cor Anglais. Rarely seen together in a single recital, these instruments first get to display their particular individual qualities in works by CPE Bach, Benjamin Britten, John Rushby-Smith and Vincent Persichetti, after which they join forces in possibly one of the most exciting works ever written for solo oboe: “Solo” by the Italian composer Bruno Maderna.