Now here’s a mouth watering prospect, two of the most accomplished and exciting saxophone players anywhere, coming together from very different backgrounds. This exiting new band showcases the contrasting alto saxophone talents of the co-leaders. Kofi is a heavier toned, blues drenched wailer of the Jackie McLean School, whilst Barnes has taken the lighter, crisply articulated phrasing of Art Pepper as his guiding light. Put the two different approaches together and the chemistry is instantly explosive, producing some of the most committed, yet accessible, hard swinging music around.

Barnes, arguably the UK’s most popular jazz musician, has had a career which has taken in every aspect of mainstream jazz from Humphrey Lytelton to composing musical theatre with the late Alan P. Plater and innumerable commisions for all kinds of Big Bands. Kofi, after studying at Berklee’s famous jazz conservatory, has played with many of the world’s leading jazz musicians such as Donald Byrd and Eddie Henderson. His own groups have won BBC and Parliamentary Jazz Awards…..and he is one of the few jazz players to have been nominated for a MOBO Award. The rhythm section is ‘new generation’ sparky and it should be an evening of genuine surprises. 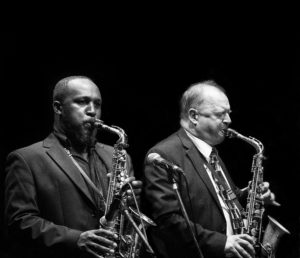