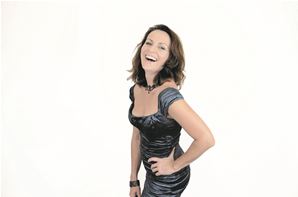 Arriving from Australia in 2000 after performing at many of the big Asian Festivals, Karen has released five albums to critical acclaim.  She’s worked with some of our finest musicians including Tom Cawley, Andy Hamill and Robin Aspland and has found herself performing in exotic places she’d never imagined she’d see including Sicily, Portafino, Nice, Monte Carlo, Berlin, Cape Town and Bucharest.

Her visit to Lauderdale House will be a unique date on the London scene when she recreates the music of Nancy Wilson. Had she not coincided with the advent of rock and soul, Nancy Wilson would have been considered one of the greatest female jazz singers of them all.  Luckily she did record a number of albums with one of the greatest jazz musicians of all time, Cannonball Adderley and Karen thinks it’s high time Nancy’s music was reassessed.  This is going to be a concert you should not miss!

“.. a fine and distinctive singer” Dave Gelly, The Observer

“.. as accomplished.. as I have heard this year” Peter Quinn, Jazzwise

Concessions are available for students, people on benefit and over 60s. Proof must be provided when collecting tickets.