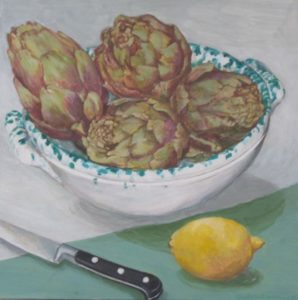 Judith was born in Ashington, Northumberland and studied painting and etching at King’s College, Newcastle in the 1950s, under Lawrence Gowing, Richard Hamilton and Victor Pasmore.  This was at the time when Newcastle was pioneering the famous ‘Basic Design’ course, which created a revolution in art education in the UK.  Judith went on to teach at Newcastle before going to Paris to work at SW Hayter’s etching studio, Atelier 17.

After leaving Art School, Judith lived and worked in Paris, London and New York.  She taught at Leicester Polytechnic and Chelsea School of Art.  In 1968 she and her friend Zena Flax established a group of printmakers in North London, called Printers Inc, holding annual exhibitions of their work.  In retirement Judith continued to teach etching from her home in Kentish Town – her kitchen famously was dominated by her large etching press which doubled as a kitchen counter.

Judith’s early work was largely abstract and concerned with process, but counter-intuitively became increasingly figurative as her natural pre-occupation with landscape, animals and food re-asserted itself. Her later work expresses her life-long obsession with drawing, form, pattern and technique while anchoring itself explicitly in her day-to-day life and cultural influences.

Her love of animals began in childhood; after retiring from teaching she owned a pet shop, and for the last twenty years of her life she lived with a tyrannical ‘free range’ cockatiel called ‘Beaky’, who features prominently in her work, along with the pets of friends and other animals that caught her eye; all were closely observed.  Food was the other lifelong passion, which increasingly found expression in both her etching and painting.  Judith was a semi-professional cook and generous host who owned over 1000 cookery books; the place food occupies in her work expresses the excitement of her post-war generation newly brought into contact with French and Mediterranean cooking.  Just as Cezanne was a continuous reference point in her painting, so Elizabeth David was her touchstone in cooking.  Her etching ‘Homage to Elizabeth David’, which depicts both the casserole belonging to David, which Judith bought at auction, and her well-used copy of French Provincial Cooking, perfectly captures both these influences.

‘I paint and etch the things I live with, like and eat, as I need to gaze at them for a long time.  Richard Gregory (he of ‘The Eye and the Brain’) says that painting is impossible, but I think of figurative painting as more like magic.  It is wonderful that some brush, pencil or ink marks on a flat surface can vividly conjure up the three-dimensional world.  It is magic to look at paint and feel the weight of an apple, to know that brush-marks are brush-marks, but to see in them the distance between solid objects or between trees and hills.  The complexity of perception is a mystery and the ultimate subject matter.’

All work will be for sale.