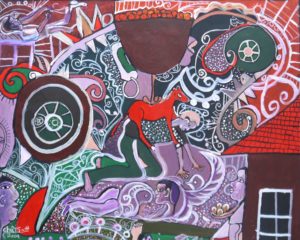 This exhibition is a rare opportunity to see a unique Jamaican branch of contemporary art which was first acknowledged post-independence and which continues to flourish. There are no pretty beach scenes; no ‘tourist’ art. The work is challenging and powerful.

Until Jamaican Independence in 1962, the larger part of Jamaica’s art establishment took only European and North American style art seriously. This was a legacy of colonialism. With Independence, the importance of the arts and of acknowledging and exhibiting Jamaican artists was recognised in helping to shape a national cultural identity.

It was the late Dr David Boxer, Director and Chief Curator of the National Gallery of Jamaica for over 35 years, who coined the word ‘Intuitive’ – now an official art term. He defined the context in which these remarkable artists’ accomplishments should be considered:

‘These artists paint and sculpt intuitively. They are not guided by fashion. Their vision is pure and sincere, untarnished by art theories and philosophies, principles and movements. They are, for the most part self-taught…. Their visions (and many of them are true visionaries) as released through paint or wood, are expressions of their individual relationships with the world around them – and the worlds within.’

All five artists in this show were born and (have) spent their lives in Jamaica. Their work has been part of major exhibitions at the National Gallery of Jamaica, and has been shown across the Caribbean, the US and Europe.

Opening Party on Sunday 15th October 2-5 pm featuring the Koromanti Mento Band. Mento is Jamaica’s folk music and the precursor to ska and reggae. The High Commissioner, His Excellency Mr Seth George Ramocan, will be guest of honour. Jamaican Intuitives is part of the official Jamaica55 celebrations.