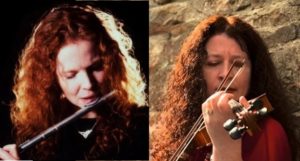 Jacquelyn Hynes is a highly regarded flautist and composer, rooted in Irish and English traditional music who has played alongside and supported many of Irelands leading artists including Martin Hayes, Michael McGoldrick, Mary Coughlan and Lunasa. Her debut CD “Silver and Wood” received 4 star reviews from the Telegraph and RnR magazine, and was Album of the Week on BBC Radio nan Gaídheal.

“Haunting and wonderful” Telegraph (Folk Albums of the Year)

A musician, teacher and promoter, it would be no exaggeration to say that Karen Ryan lives and breathes traditional Irish music. Born in London to Galway and Mayo parents, it was a strong Connemara tradition of melodeon players and traditional singers on her mother’s side that initially fired her love of the music.

Karen started playing music at the age of nine, taught by the North Leitrim musician Tommy Maguire at the London Irish Centre, where she herself now teaches. It was here that she met lifelong friends and fellow fiddle players, Elaine Conwell and Teresa Connolly (Ní Heanue), with whom she won the under 12 Trio competition at the All-Ireland Fleadh in 1985.

In 2013 Karen was awarded ‘Female Musician of the Year’ by Chicago Irish American News and ‘Instrumental Album of the Year’ by Live Ireland. In 2014 she was award a ‘Bliain na Cruinne’ Award by Comhaltas Ceoltóirí Éireann for teaching and other services to Irish culture overseas.

“That she is an exquisite fiddler is beyond question. Almost by definition, the whole character of the album is, of course, London Irish – a style of which Karen is undoubtedly today one of the very finest exponents”. The Irish Post