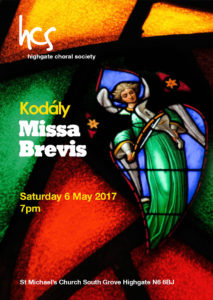 Throughout 2017 the 50th anniversary of the death of Hungarian composer Zoltan Kódaly is being marked. In 1945, while hiding with his wife and many others in the cellar of the Budapest Opera House during the Nazi occupation, he completed his Missa Brevis, which had originally been an organ mass. Its first performance was in the cloakroom of the Opera House, later receiving its official première at the 1948 Three Choirs Festival in Worcester.
By the time of this concert Highgate Choral Society will have been on its tenth tour abroad, to Naples, Sorrento and Pompeii, where they will have performed sacred and secular pieces by Finzi, Mascagni, Puccini, Rossini, Vaughan Williams and Verdi, as well as Campion, Palestrina and Tallis.
The soloist in the Missa Brevis will be young soprano Iúnó Connolly, who will also sing a selection of English and Italian songs accompanied by organist Edward Batting.