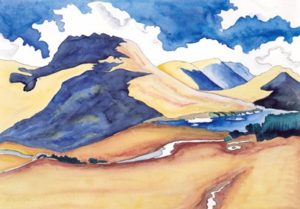 This exhibition entitled Energy shows mixed media land and seascape originals, limited edition prints, and seven small oil paintings illustrating the landform project being created in Cornwall. Elspeth works on the cusp of abstraction and figuration. “I attempt to reveal energy, a vitality which, once engaged, never diminishes with time.” This has been the appeal.

Elspeth qualified as an architect from Liverpool University, practiced for years and was invited to teach soon after qualifying. She has no formal training in painting but as an architect was regularly asked to make substantial commissions in glass and paint, and to lecture abroad.

She designed three large stained windows in West London in 1981, 1989 and 1996, and in 1983 painted a huge political cartoon, a mural in a house in Westminster for an active politician. It was during these projects she realized the power of communication through composition. In 1999 Elspeth was shortlisted for Millennium artist for North Cornwall. Six interactive proposals were made, all local and doable, including a dark skies project down-directing street lighting – all seen as too ambitious.

This exhibition can be seen as a retrospective on 20 years of painting. Three years of blindness (2013-16) make this show a real celebration and a natural transition to any potential new work. Elspeth started painting landscapes in 1991 while teaching design workshops in Australia. In November last year she returned, with improved – but impaired – vision, to Australia to paint the extreme coastal points including Point Lookout in the west and Albany in the south-west, which may lead to an inevitably different style of future work, but for now a celebration of sight and works dated to 2013.

Initially Elspeth exhibited her paintings in themed shows, for example at Salisbury Playhouse in 1996, with 80 small works around the drum to highlight erosion and pollution (the Sea Empress oil spill off west Wales and the breakage of Spurn Point road in Lincolnshire), issues in the environment but always the aesthetics of light, heat and sound as space makers, interactions that make a whole. This interest, focusing on energy and environmental conditions, has been reflected in the choice of subject and titles of earlier exhibitions. She has held a total of 22 exhibitions in London and elsewhere since 1994 and reviews, including the Spectator in 2002, have recommended a wider audience. She has also been interviewed on radio: Woman’s Hour 1994, BBC Radio 4 2013 and Liverpool City Radio 2008. Her paintings are held in collections in the UK and overseas. The concerns reflected in her shows underpin the educational facility in Cornwall as it progresses.

Intensity is a quality that penetrates the images which range from the quietude of a scene on the Thames to a force 9 wave off Land’s End. The interrelationship of abstraction and figuration mentioned earlier remains the prime creative interest to the artist. A timeless zero.

The next few years may prove very different. Elspeth hopes you and your friends will share refreshments with her as this new journey commences. She will be in the gallery throughout the exhibition.