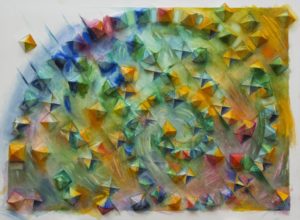 The predictability of Chaos and the uncertainty of Order are the focus for this dynamic and colourful exhibition of paintings and drawings at Highgate Gallery from May 18th until May 31st.

Order and Chaos philosophies have peppered religious and scientific history for millennia with ideas formed around the ‘Chaos Theory’ coming to the fore in the middle of last century.  These are the subject matter for playful new works, many executed in low relief which adds to the visual uncertainty – a change in the angle of view reveals aspects that cannot be seen from elsewhere.

Slade trained Stephen Brooks has often played with ideas and questions that have created ideological dilemmas.  This was also the case in a previous exhibition, ‘Ptolemy’s Mythtake’ at Highgate Gallery in 2008.

Exhibition continues until 31 May.

Steve Brooks trained in Fine Art at the Harris College of Art, Preston, and the Slade School of Fine Art UCL.

For several years he was the Studio Assistant to Richard Hamilton, a founder of the British Pop Art Movement, who lived in Highgate before moving to Oxfordshire,

Alongside Steve’s fine art career he taught Design and Drawing in Oxfordshire, Bournemouth and London whilst also being involved in a graphic design business with his wife.

Having lived and worked in various parts of the UK including The Orkney Isles, Dorset, London, Oxfordshire and Wales, he is now based in Herefordshire.

He has held one man shows in London, the Home Counties and Herefordshire, and was chosen to represent Herefordshire as the Three Choirs Festival Artist in 2006.  His paintings and drawings are in collections in the UK, Europe and overseas.

Steve’s connection with Highgate goes back to the 70s where he lived and worked.  He had two one man shows at the Highgate Society building, one being an exhibition of Drawings and Etchings of Highgate Cemetery in an effort to raise awareness and funds for the then neglected site.

Chaos2 is his third Exhibition at Highgate Literary and Scientific Institution’s Highgate Gallery.