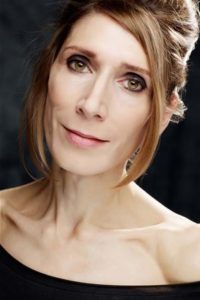 Where is home? And what does it mean to return there?

West End and Broadway actress and longtime host of Cabaret In The House Valerie Cutko returns from a season at the Pitlochry Festival Theatre where she led the cast of Alan Bennett’s People in its Scottish premiere. She and Musical Director Simon Beck present an evocative, witty, sophisticated set of songs on the theme of homecoming from composers from Cole Porter and Johnny Mercer to Leonard Bernstein, Stephen Sondheim and John Bucchino.

Valerie’s West End roles include Fraulein Kost in Cabaret, Marlene Dietrich in Piaf, Madame Egorova in Beautiful and Damned (the story of Scott and Zelda Fitzgerald, directed by Craig Revell Horwood) and The Queen ofTransylvania in My Fair Lady. She played Madame Giry in The Phantom of the Opera, Mrs Mullin in Carousel and Ninotchka – the role played by Greta Garbo in Ernst Lubitch’s 1939 film Ninotchka. In 2015 she played Rafaella in Grand Hotel at the Southwark Playhouse, the role she took over in Tommy Tune’s original Broadway production. Valerie has performed in cabaret at Birdland in New York and at London venues including the St James Studio, Jermyn Street Theatre, Soho Revue Bar, The Old Vic Theatre Bar, Freud’s in Covent Garden, Wimbledon Theatre Studio and Torch in King’s Cross.

Kitty is a Jazz singer and one half of the music duo Sealionwoman, who have played The Vaults, Union Chapel, Cafe Oto, Ikletik and numerous other London Venues.  Her theatre ​credit include Dr Warner in Metropolis, Assistant Choreographer for The Frogs, Delivery Kid/Various Ensemble in Wonderful Town, Jenna in Jagged Edge, Selkie in Selkie. Winner “Festive Spirit Award” for Vault Festival 2016.

If you just want to join us for Cabaret then you can purchase a full price ticket for £16.00 / £14.00 concession for students, unwaged & Equity members only.

TICKETS AVAILABLE BY PHONE OR IN PERSON ONLY