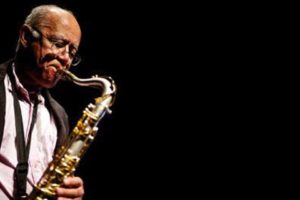 concessions limited to disability, people on benefits (not over 60’s)

According to The Observer’s Dave Gelly ‘Art Themen is one of the tiny handful of undeniably perfect musicians‘.

He is in constant demand all over the country as a solo attraction and over the years has appeared nationally and internationally with Stan Tracey’s various bands, Alexis Korner in the early days of R’nB and, later, with Cream’s Jack Bruce. A living true legend!

Art’ New Directions was launched a few years ago at Lauderdale and is a band of A List players, with a strict ‘no deps’ rule, which is close to his heart.  Designed by him to look afresh at some of the lesser known gems from jazz’s golden age written by musicians such as Thelonious Monk, Dexter Gordon, Cedar Walton and many more, it is doubtful that you will hear a better band in any idiom than this.